On some days, I feel grateful to be a teacher. Today was one such day. Nothing special happened. It was a regular first day – there were some promises to the self: to wake up early, do yoga, read, make chai, leave home early enough to enjoy the 8:30 am traffic, and nod at motorists. But as real life would have it, I only had time to do yoga.

From 9:00 to 11:00, I was in lab – absorbed. working. in my world. doing my thing. We talked about writing, blogging, dealing with insecurities. Two days ago, at 9:00 I would have been basking in vacation mode – thinking only about having a full breakfast. But today, just like that- I went from being a wasteful and useless member of the human species to an active member who isn’t so aware of her wastefulness.

I headed back to the department and spent the noon writing, and reading Virginia Woolf’s A Writer’s Diary. Amazed at how she took notes of what she was reading, I did the same.

Lunch was a homely chicken saaru, rice, and Genasu -which I ate while watching Black Swan. This is my second time watching the film and I am once again grateful for passion, for women, and their stories of madness.

In my next class, we talked about our first visits to a theatre. I remembered suddenly my mother’s story of how she watched Satte Pe Satta after waiting for three months. They had to sell a lot of tea powder to make enough money – my mother and her siblings. When they had enough -they put the notes in a bundle and wound it neatly with a rubber band. They put the coins separately in a plastic bag. Preparations began a day before they were to watch the film. Clothes were picked out and put under beds to iron out creases, hair was washed, talcum powder dabba was almost empty.

I told them this in exchange for their stories. A student from Assam remembered tent films being screened for plantation workers. ‘They couldn’t find a screen so the films were projected on a white cloth,’ he said. Another student remembered paying Rs 7 to watch a film in his hometown. Someone else remembered how the names of films were announced by a cycle-wallah who carried banners and went around the town.

I returned again to the department for chai and more stories. A student’s Gokarna story, someone’s train journeys, someone else’s adventures with the camera.

At Lalbagh, where my two-wheeler stopped at the signal, I looked up and sighed at the 140 arms and fingers of big trees. The sky was plain, home was close, and I was happy for a doing a job that doesn’t bring me existential pain on Mondays.

And for this – I will always be grateful.

Update – I didn’t realise this when I was writing the post but the day was indeed special. I finish five years of teaching 🙂 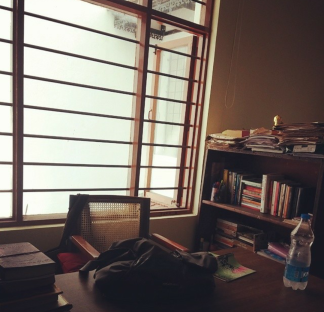