As always, the darkness in the auditorium at Max Mueller was inviting, not too cold; and my first glimpse of whatever was on screen was the bluish glow from the white mattresses on the floor, and the various bodies sprawled on it.

When one is in the auditorium for the first hour of BQFF, one is a body – in that, you are conscious – the mattresses take about an hour to make you feel at home so you won’t put your feet in people’s faces, you won’t even put it back, out of respect for the body behind you, you worry that your feet smell, that you are taking too much space, but within an hour – the bodies become shapes and you become a shape too. Slowly, you begin picking on the cracks of your heels, the corns on your toes, your hands go back, your body feels lighter and then you are slouching too.

The people seated demurely on chairs behind you are very much there but you only acknowledge them when you exit.

I spent the first five minutes adjusting bum, and a few minutes after that – looking for familiar shapes. Found a couple but one can never be too sure so I stayed put and didn’t grope them like I usually do (with consent, of course)

The first film I watched was the Bengali & English – Aabar Jadi Ichchha Karo (If You Dare Desire) by Debalina. Two women who go by many names – Swapna & Sucheta; Aparna & Kajali; Moyna & Bandana leave home to be with each other. In Kolkata, they find family after family but not the space they need to simply be left alone with each other. Even so, they puncture the city with charming moments. Standing under a tree on a rainy Kolkata day – they both hold each other even as another woman offers them her umbrella. 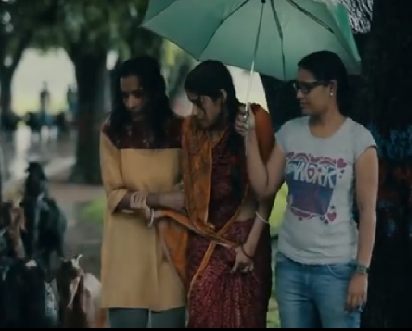 They get in. A herd of goats pass by and they both move back quietly, shivering. They seem more afraid of the umbrella woman than of the goats. Here they hold each other warmly, their arms entwined. This is a moment I teach myself to look for in all of the following films. Focus on hands, faces, chins, and stolen smiles.

Ektara Collective’s Turup (Checkmate) was the highlight. It reinstated a long-standing belief I’ve had. That only old women can pull off the best dialogues in films. The star of the film is the 60 something Monika Mausi who works as a maid in a family that I feel like I know very well. Husband – booming industrialist who gives money to right-wing mofos. Wife has quit her career in journalism because husband wants baby.

She asks Monika one day – Tumhari shaadi nahi hui na? (You didn’t get married no?)

Monika snaps – Shaadi nahi hui nahi. Maine Shaadi nahi kiya (It’s not that I didn’t get married. I did not marry)

Monika is actually a cat who can’t stand cats. She lives alone, walks alone, reads, plays chess, tears down Hindutva cow posters, and drinks chai standing up – thinking, planning, and living. A fab moment was watching her play chess in one scene. A cat walks by and Monika brushes it away, like a cat would, nonchalantly.

Journalist wife asks her one day – Don’t you ever get lonely?

Yes. But it comes and goes.

Don’t you want to have a family of your own?

Why? We can choose our families no? That’s also possible.

Sounds – A Koel cooing gently every time Journalist wife sits in her bedroom, wondering what she’s doing with her life.

I learn that doing what one loves to do is the surest way of happiness – alone, with little joy, in sickness and in health.

Pich makes Baisri (an ornamental decoration made with leaves and flower petals) and this helps him survive cancer. He loves making them even if they wither and die soon. The most difficult thing about making this, he says, is that you must hold the leaves gently but fold them tightly.

Once he’s done, he lets it float away in the river and feels complete only after he lets go. Too many truths, too many moments. Many sighs. I liked watching him alone doing his Baisris than with his lover, Shane – who I wanted to kill. Pich died doing what he loved. In one scene, he tells Shane that he believes he gets better and his cancer goes away when he makes a Bai Sri. ‘It’s all in your head’, Shane tells him. Shane is just a husband through the whole film. Dabba fellow.

Obnoxiously loud North Indian women howl and scream and laugh when a woman on screen is having orgasms for the first time in her life. Sounds of orgasms are far more desirable than the loud, raspy, insect laugh of people in gangs. Wankers.